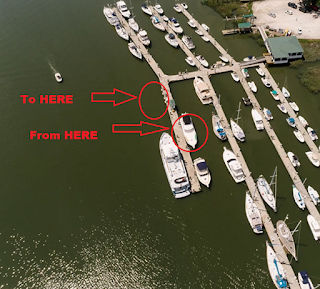 As the crow flies, I only had to move the boat 30 feet. However, to do that I needed to back her up back through that notch (a newer, wider boat looms near the notch now), then park her on the fuel dock between two fancy boats, one of which is over 100 feet long.

Did I mention the weather? Windy and rainy. Not at all ideal.

Which is why we waited until 4:15. High tide, and the slack that follows. So all we had to contend with is the wind.

I hadn't been so nervous in a really long time. Right at 4:15 Russ went to the ship store and got some workfolks to help out. One rode with us, the other fended the boats as we passed then caught our lines. Backing out is a challenge since the helm is set up to move forward. It's really tricky to have to keep your back to the front, and work the controls.

We wanted to be on the lee side of the small channel as we moved. Once the lines were off Russ and the other help pushed us away. Just as the wind died off. So, nice we didn't have to deal with it, but a bummer since I counted on it pushing me the rest of the way off. I twisted and bobbed a bit and managed to get us more or less square, then started the backing. It was still a little too close to the boat on the lee side, but Russ and the help fended off without issue. We had, I was told later, about a foot.

Next challenge was docking. We thought the tide was slack at that point, so we set up to do a starboard tie. However, there was just enough current pushing us off from the dock. We noticed that anchored sail boats were still pointing at us. I told Russ we were going to go again, but from the other direction. The crew quickly switched the lines to the port side as I spun the boat around. That time it went perfectly.

All in all not a far or long day, but a bit stressful nevertheless.

Posted by Jax Robertson at 2:29 PM