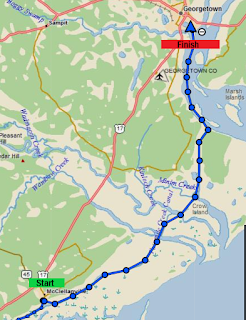 Got another earlier start to the day, largely out of habit now, which made it a pretty easy ride to Georgetown.
Parts of the ICW remain thin on this section. Up to this point what we traveled through had been dredged this past year, so many of the exciting parts we dealt with on the loop were less exciting. Here, however, we had to remain a bit aware. Lots of little streams and rivers criss-cross the the intracoastal, creating shoals as well as cross currents. We faired well.
We skipped Georgetown last time through, stopping in Myrtle Beach instead. But many have said it was one of the best little towns in South Carolina. We can see why. The marina is just steps away from the quaint downtown. I'm sure during a typical summer this place his hopping with families on vacation. While the marina is full, there weren't many folks in town.
Back in Isle of Hope, about a week ago, one dog developed an eye thing. Again. So we took her to an eye specialist in the area. Over the last few days however she's developed tremendous lethargy (and this wasn't a whipper-snapper of a pug to begin with), a possible cough, eating issues (she eats but she's real slow, possibly the only thing she's ever done fast in her life), and today the other eye is covered in mucus. I called a number of vets in the area, both here and up the coast, hoping to get someone to take a look and none of them (!) would. They all claimed they were booked, they aren't taking new clients, or go to the emergency vet. Which I would do if I had a car. It's a 45 minute drive from here. I asked one what was going on? She said she wished she knew -- things have suddenly gotten real busy.
I called said emergency vet and explained the situation -- they told me to put a warm compress on the eye. Needless to say, I'm bummed out. I've reached out to Harbor Hosts up the way, hoping they had a vet we could go to. Fingers crossed.

Posted by Jax Robertson at 5:20 PM