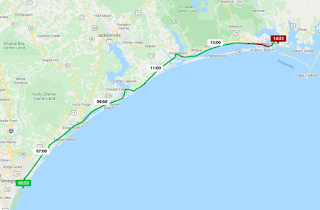 Throughout the loop there were a couple of places where there were so many boats the waterway was clogged and chaotic. One such place is called "The Miserable Mile", and it's the slow zone just outside of Fort Myers, Fl. Another was up in Canada just passed Simcoe Lake, the town of Orillia. We arrived there on the weekend they were having jet ski races. The place was full of boats, all zipping around, including hundreds of jet skis.
Today blew all of them out of the water.
Firstly, it was a lovely day; sunny, warm, light winds. Secondly, it was a weekend. Additionally, there was a Trump Boat Parade in Beaufort (I won't bore you with my politics since most of you know my position, but 80-90% of boaters are Trump supporters, and they were out in force, flags and slogans a-flyin'!). If you read my post last night then you are aware that North Carolinians have no idea what a wake is. Put all of that together and you have a huge number of boats, all going as fast as they can, waking us and each other all day long. And I mean all day long. Some of these boat could barely handle the waves their fellow boaters were making. At times this was a thing; either we were all trying to occupy a very narrow channel, or go though a small bridge opening. We estimate -- and we aren't exaggerating -- we passed at least 500 boats. It. Was. Crazy.
On the plus side, given the lack of courtesy by other boaters we saw no reason to slow down for anyone ourselves. We purposely planned on a longer day to get up north. So maintaining speed had an advantage.
By the way, we were the biggest boat out there for the most part. Most of these folks have center consoles, t-tops, or john boats. We've come to learn that we pick a line and let everyone else buzz their way around us. We just watch for the occasional bozo who's not paying attention. Got to hand it to the Trumpers, they did well in navigation.
Arrived safe and sound in Homer Simpson's Marina! Actually, it's called Homer Smith's Marina, but I get them confused.

Posted by Jax Robertson at 2:30 PM