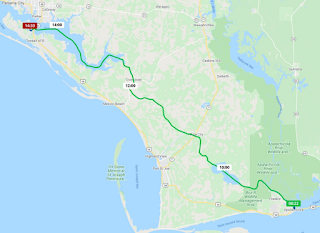 For the next few days we'll be retracing our steps from this segment of the loop in 2019. That is fairly handy since we know exactly where to go, at least until we get to The Wharf in Alabama.

While in Apalachicola we were docked by the Ice House (which means something to those who've been there). As I walked the dog I noticed a small bakery directly on the other side of the street with a chalkboard sign out front that read "BISCUITS." I love biscuits. I made a note that I'd pick some up in an hour or so. When I went back, however, they were closed with a "SOLD OUT" sign on the door. It was only 8:30 in the morning!

So, this morning, just as dawn was breaking Russ went across the street and snagged us some biscuits. Turns out it isn't a bakery at all, just a small business that makes and sells biscuit sandwiches for breakfast. All of which have meat, and we're mostly vegetarian. So they made us special egg and cheese ones on the spot. I can't recommend the place enough. But. GET THERE EARLY.

We shoved off around 8:30, bellies full of biscuits sammiches, and took the toodle on the ICW. We're planning on fueling up near Destin so we're watching our speed today.

The only notable event were dolphins, which followed up almost the whole way along the East Bay, for a couple of hours. Clearly these dolphins were seriously looking for a ride.

The south wind kicked up quite a bit by the time we dropped the hook. The advantage of anchoring is that you almost don't care, unlike trying to dock in such a breeze.

MORE FOOD: We timed our meals poorly yesterday so we weren't able to get to The Hole In The Wall for oysters. (Moreover, they only had 1 table outside, which bummed us out). I decided, as I always do in such situations, on pizza. Of late, getting a decent pizza has been elusive, so our hopes were not high. This time, however, we were not disappointed. If you want pizza in Apalachicola, you must go to Up To No Good Tavern. We simply got a cheese pizza with extra sauce on the round crust (that will make sense if you go there). I'm looking forward to when we get back there, this October or November.

Posted by Jax Robertson at 3:54 PM