So, yeah, um, Mississippi. We had a car rented and we had a plan for getting to New Orleans. What the heck happened?

For the last 2 weeks or more, whenever we checked the weather apps they all disagreed. One would say, "great day tomorrow" and the others would say, "No! Certain doom awaits you!" Daily. This morning, however, all of them said the same thing. Great weather for the next 3 to 4 days. So ... go! 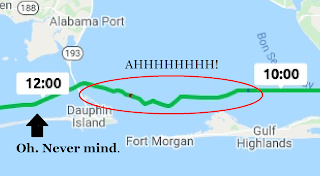 First task was getting out of The Wharf. No issues with wind or tide, but we were tucked into a slip (if you recall they made us move, and no, that other slips still is empty) off a narrow fairway that required twists and turns to get into. Leaving, however, it became clear as I moved out that I wouldn't be able to turn the boat in a way as to head out nose first: next to us was a huge sport fisher boat whose bow I would bump if I tried. I ended up turning away from it and backing all the way out the twisting fairways. Kinda fun.The first hour of the journey was still in the canal. The second hour is when you hit the Mobile Bay. The third hour, things got crazy. While the winds were calm they were from the north, and the bay runs longwise north and south. We got into some rolly seas, so much so that we sped up and tacked when we could. I was miserable at 11:30, but thrilled by noon, when we went under the bridge to Dauphin Island. Once we crossed that magic line, the seas turned to 1 foot or less. And they continued to shrink as the day went on.

All in all, a longer day to Biloxi, about 8 hours. Tomorrow we plan on getting to Bay St. Louis, about 3 hours. Then onto NOLA on Tuesday.

Posted by Jax Robertson at 4:39 PM