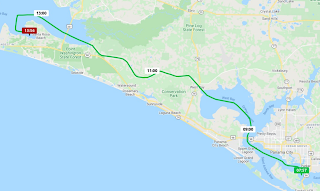 A big part of boating is having a plan B. And C. And a D if you need it. Sometimes, you need options.

We left the anchorage with calm winds and water, but we knew storms were coming. Both Russ and I check various weather apps and sources, all of which confirmed rain, possible thunderstorms, and winds around 15. We still had to get off the West Bay (a sizable body of water) and cross the Choctawhatchee Bay to get to Destin, another large body of water.

The West Bay was no problems. The storms came and went while we were on the canal, also no problems. Blue skies were in the distance as we entered the Choctawhatcee, and our destination was still 3 hours away.

About an hour in, however, the winds picked up. Then they picked up again.

All the while I watched the wind direction (and the waves it created) with respect to our own. If we can take waves on the stern or quarter, we ride pretty well, even in good sized waves. We weren't out in truly open waters like the gulf, so this should be doable.

The winds were blowing from the south, and we had land on that side to protect us. But then we had to turn, which meant what waves we did get were on our beam. We really don't like it on the beam.

Initially, the waves were so close together that we bounced but didn't have a terrible ride. But the land recedes a bit for the Hogtown Bayou, and -- because Murphy -- the winds kicked up. Our weather station reports sustained gusts of over 40 mph. When the first 4 footer hit us on the beam, sending anything not tied down either flying across the room or skittering across the floor, Russ found us an anchorage. We made a 90 degree turn into the wind and headed for some shelter. 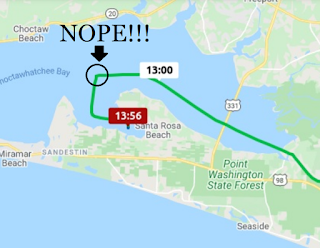 This particular section of the water is marked with lots of CAUTION warnings about pipes in the area. But we couldn't find any discussion about that. How big are these pipes? Were they laying on the bottom? Were they sticking up to damage our hull? More information, people!

We safely navigated to an anchorage tucked back in the bayou. Once engines were off I noticed that I had a NOAA warning about major winds that followed the storms and could affect the area for the next 2 hours. However, 3 hours later we still had winds of over 25 mph.

Not the ideal anchorage since there is no dog walking opportunity. But then again, 25 mph winds -- odds were she wasn't going to get walked anyway.

Posted by Jax Robertson at 4:49 PM