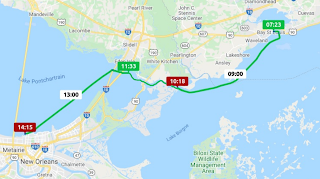 When we were on the loop there were certain destinations that felt like major victories, made us say "Wow! We're really doing this!" Places like New York, Chicago, even crossing under the big arch of St. Louis were examples. For some reason, so did getting here.

Been to New Orleans a bunch of times, even lived here for almost 10 years, but boating here was a milestone.

No engine issues, no docking issues. We had to cross under 3 low bridges. The first was a railroad swing bridge which opened immediately once we arrived but was so slow it took 15 minutes before going through, long enough for our Nebo to think we were done for the day. The second two were right next to each other, a road bridge and a railroad bridge. Both were open. However, one of them, highway 11, was in repair. Normally two parts lift upwards, making a nice large gap to boat through. Only one side was open, however, and a barge was parked beneath the opened side. Russ stood on the bow talking to the workers who had to move a cement pour spout so we could get under. They were very entertained that we could squeeze through. From the last bridge it's a 2 hour straight shot across Lake Pontchartrain to the marina. We arrived around 2 pm. Russ got our rental car, we loaded up with boat stuff (lots of laundry to do, mostly bedding), and...

Posted by Jax Robertson at 6:32 PM