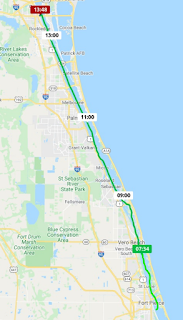 Synopsis: Windy leaving with crazy currents in the marina, a little long, ended with a bang. Like literally. But a great day overall.

We left pretty early, 7 am, which was just 6 am a couple of days ago. Sun hadn't risen yet, but it was light enough to see. The east winds pinned us on our pier, so we had to use a bit of force to get off. The tricky part was in the fairway itself, with a current that created eddies and swirls. I felt like I was on the Mississippi again. But we got out without much of a hitch.

This part of the ICW is on the Indian River, a sometimes skinny sometimes wide stretch of water between the barrier islands and the main land. We saw a number of derelict boats (we must be in Florida) and, for the first time in a while, dolphins! Tens and tens of them. They even took a ride with us, which was a first on this side of the state. For some reason the gulf dolphins almost always rode our wake, and last year the Atlantic side never did. But today, they were everywhere! Probably just waiting for some boat to go by because none did for the last week or so due to the weather. 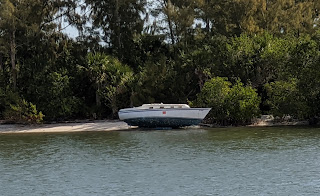 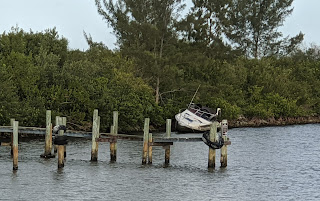 Anyway, time to get into the marina. The skies had darkened a bit and the winds came up. None of which were a problem, really. I knew where the wind and current would take me, I lined up perfectly, setting us just off center so as we backed in we'd get into the slip dead on.

Then the dock hand dropped his sunglasses, somehow, and Russ got distracted in an attempt to help him, not noticing that I was drifting juuuuuuust a little wide, then... bang. We hit a piling. Not fast, not real hard, but enough to break the cap on our rub rails. I've included a pic. And, to be clear, that is exactly what the rub rail is intended for, so no harm, no foul really.

One of these days we're going to get a cool docking remote, which will let me be anywhere on the boat and pilot it. I can't wait to stand on the back porch and see exactly where the stern is going. Someday.

Posted by Jax Robertson at 1:21 PM