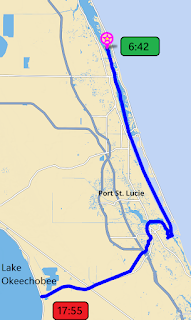 Long long day, but we had many delays and stops that contributed.

The first stop was in Stuart where were added some fuel at Sailfish Marina, which took about 30 minutes (a fast fuel up for us!).

From there we had to wait a bit at the Roosevelt Bridge. There are 3 bridges right in a row, 2 of which you need to have opened. Typically this area is jammed with boats. Thankfully today there were only 3 of us and we were all headed in the same direction. We timed that pretty well, so it was only a 10 minute delay.

The next holdup came at St. Lucie Lock, which was loading boats in at the top to lock down to us. That delay cost us about 30 minutes.

Lastly we happened to hit a railroad swing bridge on the canal that us "usually open" according to the guides. No one mans it so you have to call them to find out when it will open. Two trains were coming, so it would be about 45 minutes. We dropped the hook at that point rather than stand station, but went on after it opened.All these delays cost us getting through Mayaca Lock, which is the lock onto Lake Okeechobee. The last lock through is at 4:30. Our arrival here was 5:50. We had no plans on crossing the lake today but it would have been nice to be on the other side of the lock for another quick and early out.

Should be a lovely day regardless. Thunderstorms are predicted for the late afternoon. We should be well off the lake by then.

Posted by Jax Robertson at 6:28 PM