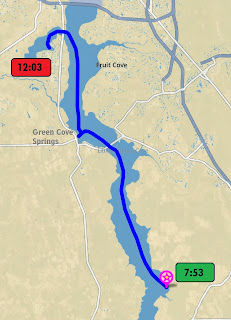 It was breezy all night long, despite the weather apps claiming it would die down. We weren't uncomfortable, just had a some hull slap throughout.

We continued north and headed for Green Cove Springs. Once there we lacked enthusiasm to anchor and take the dinghy to shore, loaded with a bike, all so Russ could get our packages. The winds were making the water choppy and we were feeling disgruntled.

We talked about what our holiday plans, spending time in St. Augustine. It's a 1 day trip from Jacksonville, so we're way ahead of schedule, planning to be there around the 15th. Additionally, the weather apps all say it will be windier next week, probably very rainy.

Russ called Lamb's Yacht Center and booked us a week there. Rumor has it that they have a courtesy car. We'll just take it to GCS sometime next week.

We turned northward and continued to Doctors Lake, which has better protection from the wind. We'll go to Lamb's tomorrow.

Posted by Jax Robertson at 3:07 PM