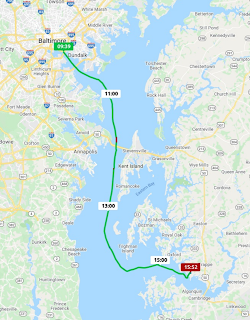 No. Not that Cambridge.
Russ made an appointment almost a month ago at a reputable company in Cambridge that does electric systems on boats. At the time we were having all sorts of issues. Now we're down to just a few. Additionally, Russ wants some new whistles and bells, and basically have pros look over everything we'd done thus far.*
We're due in Cambridge on Monday. But we decided to anchor out for a couple of days first.
The trip over was a little long but mostly uneventful. Lots of wakes and bouncing from the many boats on the bay. It wasn't quite as bad as the Sunday after the 4th of July, but the water was quite populated.

Our only excitement was when I realized that one of our bridle lines was missing. It wasn't missing like gone, but it was missing in that it had come untied and was in the water, being dragged under the boat. These lines are attached to the front of our two hulls and, once we set an anchor, we tie these to the chain so the boat rests on the bridle, and not the windlass. Important in bad weather. You don't want the boat pulling on the anchor motor. We cleverly made them short enough so, in this kind of situation, they couldn't get wrapped in our props. Yep, we're feeling pretty smart now! I stopped the boat, Russ got out a boat hook and fished the thing out. Then we were on our way.
No issues anchoring. Other than the 90+ temps. (see footnote!)
In other, non-boat, exciting news it looks like our condo in New Orleans might be rented. On the bummer side of that, it might need to emptied by August 1st, giving us about 2 weeks to get that done. And, oh, the entire building is being tented for 1 of those weeks starting Monday.
Ah, life. Never gets dull.
*We just discovered that out AC doesn't work, even with the generator running. Yes. Never dull...
Posted by Jax Robertson at 8:45 PM