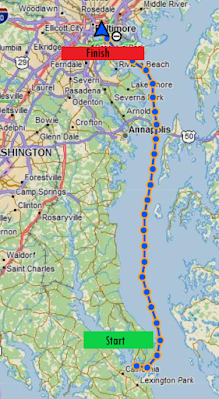 We didn't have to travel all the way to Baltimore today. It definitely made for a long voyage. Even yesterday we talked about stopping in Annapolis for one night. But, for some reason, we were antsy. We have a month long reservation there that will probably turn into a 2 month stay. And, given we could leave very early (which we tend to do), we'd still arrive by 2:30. Afternoon thunderstorms, like always, remain a slim possibility. But, you know. Us.
The first 4 hours of travel were almost boring. Flat seas, calm winds, and sunny. Then right around 10 am the seas started to churn. Not from weather or wind or storms, but boats. Lots and lots of boats. Zipping this-a-way and that-a-way, they got this huge body of water swishing and splashing. For the next 3 hours we were rocked, socked, and smacked in all sorts of directions. To add to that, the further north you go the narrower the bay gets, so the out-going tide slowed our progress to around 6 knots -- pretty darn slow for us.
We made the turn into the Baltimore area and just passed some dredging equipment. Russ was at the helm so I sat in the copilot seat keeping an eye out for crazy boaters. Something in the distance, just off our port caught my eye. It looked like people sitting on a small island. I got out the binoculars to see 4 people sitting on top of a boat... that was upside down. I pointed it out to Russ and we switched positions. He asked me to turn and get closer. As our boat turned toward them, they all began to wave for help.
We got close enough to see they were, in fact, capsized. Russ hailed the Coast Guard. In such events they ask a bunch of questions, where are you, are there children involved, is anyone in need of assistance, do they have life vests. We told them what we could, getting close enough to talk to the folks. No injuries. But 2 needed vests. We carry spares. The first thing we did was toss them a couple. Then Russ could get a rope to them as I inched inQuest close enough that they could get off the hull of their boat. Pretty quickly after TowBoatUS showed up, asking if we needed help. Then the Coast Guard came, then the Baltimore Fireboat. It was quite the scene.
After discussions with the 2 adults (it was a father and his 2 adolescent sons, and their friend who apparently owned the boat) they boarded the fireboat and were taken to the dock where their adventurous day began. Once everyone untied from us, we were on our way.
We docked around 3:30, about an hour later than we'd planned. Originally they wanted to put us in a slip, but we are a 16 ft wide vessel, and the slips are maybe 17 feet. Between the lack of space the wind that came up, it wasn't going to happen. They put us on a T-head, which was just perfect.
Once all the lines were on we took the dog for a walk. Minutes after returning to the boat, this happened: 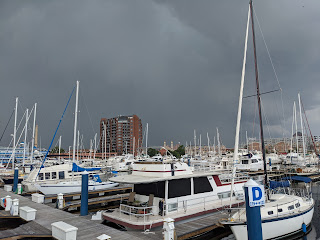 Russ and I had just had a conversation that we needed to practice our "MOB" (Man Over Board) maneuvers. Never know when you'll need to use them. And then... Good gravy, what a day!