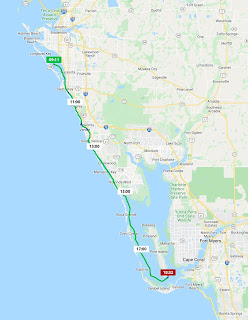 Up early-ish (well, our usual time) we made our way back to the fuel dock to pump-out before getting underway. Breezy today, with winds from the east. At times downright gusty. But we planned on traveling in the ICW for the day and not go outside, so the wind wasn't much an issue.
Right off though, going into it while getting out of the bay meant we were going slower than we like. Then we turned southward, which was against the current, so we were going slower than we wanted. Then we had stiff winds on our port side so we were going slower than we wanted.  And then... and then... and then... Eventually, there was no current and no tide, yet, we were going slower than we wanted. Same RPMs that we always use but we lost a full knot, somehow.
The plan had been to get to the bottom of Pine Island (which we did), then get to Smokehouse Bay on Marco Island where we'd stay for a couple of days, then go to Marathon on Thursday. The weather looks amazing for that trip, but it's about 100 miles, and I'm not thrilled about our bad performance in such a crossing.
Once anchored Russ got out the underwater drone. We have worms! I've posted pics of these things before. For what I can determine, they live only to find something to attach to, and then they die. They become hard, like a barnacle and have to be scraped off.
Russ called a dive company in Marco Island and they can clean our bottom while there... if we are in a marina. We planned on anchoring. So, we'll call around once we are headed out and see if we can't find a place to dock and get dived.
Oh, such boat fun!

Posted by Jax Robertson at 8:17 PM