A week in Florida 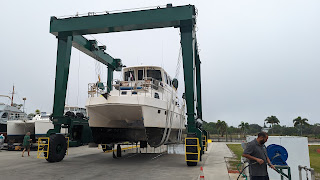 (and not on the waterways)

First, we needed to get a car. Here in LaBelle/Moore Haven there is an Enterprise Car Rental. But the price we got quoted was crazy AND they no longer pick you up which, let's face it, is the only reason you would use them. Russ contacted Avis in Fort Myers and got a way better price (he's got some juice with the company from his HP days). Even with taxi rides to and from Fort Myers, renting from there was cheaper.

Next, we needed a plan. We headed north and spent a couple of nights near my folks in The Villages. Then we meandered out east to New Smyrna, but couldn't find a hotel. So we took highway 1 south and ended up in Cocoa Beach. From there we slowly made our way down A1A to Miami. We met a friend of mine at his new digs in Aventura, north of Miami. Then got to the Cardoza Hotel in South Beach. We had reservations there for 3 nights.
Always haps in the Villages. Here's folks drumming.
My mom is in that crowd!
Spring break was in full swing, and students from everywhere were walking the sidewalks and beach ways. This made for a lot of fun "people watching." Otherwise, we didn't do too much ourselves. Russ was feeling under the weather (first time since Covid, as a matter of fact, which made him believe he should just always wear a mask). We did get to enjoy two fabulous dinners. One was at Full Bloom, which is a high-end vegan place. I had the "tenderloin" and Russ had a curry. Simply outstanding. The other was at A Fish Called Avalon. We split a pasta and a Chilean Sea Bass, the latter made with a soy sauce and some shrimp dumplings. While we ate from the raised porch overlooking the scantily clad  tourists, we had live music. But unlike the high-energy music that begs invitations for crowd participation ("Everyone clap!" "Everyone sing!") this performer played soft latin music and strummed guitars or played a flute. It was very mood making, and perfect for the night.Leaving Miami we still had a night to kill. We headed back to Fort Myers by way of the boat to see how things were progressing. She looked amazing. We're ready to get going again.

We texted some friends of ours, Charlie and Robin (who won the Harbor Hosts of the Year award, so Go THEM!). After a little back and forth they were having some docktails on their boat. We joined them, chatted with past loopers and folks we hadn't seen for a while (anyone remember TxAu?) We all had a quick bite, then the McVeys lent us their front berth for a night.

Up early we said thank you and goodbye to our hosts, then headed to a Cracker Barrel for breakfast. They still have the best blueberry pancakes ever. From there we dropped the car off and got our taxi back to River Forest.

We arrived here around 11 am. But they still had a bit of touchup to do on inQuest, but it had to wait -- within 10 minutes of getting back the skies poured rain for about an hour. Not great when trying to get painted. As a result, we didn't get splashed until 4 pm. 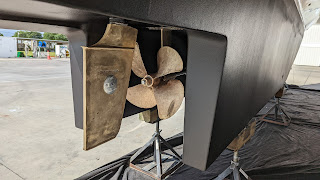 Busy week. Now we drag our heels a bit. The lock is on schedule but won't open until March 31st. Which is a week away... and we really could get there in a day.

There will be much dilly-dallying.