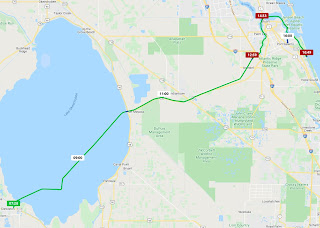 Quite a day! The pier at Clewiston had gotten pretty full, and a number of folks -- including us -- planned on leaving today (Tuesday). Boats were stacked nose to stern all along the dock. Since we'd been there before, we knew the best plan of action was to turn around before docking, so you only needed to pull forward to leave. However, all the other boats were new. They all docked heading up the tiny channel, so all of them would need to back out. Also being new, they wanted more space to do that maneuver. So, we "took one for the team" and left very early so there was space for others to get out.

All of us were jazzed, too. The St. Lucie Lock was open today, two days ahead of schedule.

By 7:30 am we were out on the Okeechobee. The winds were less than 10, but the lake was quite lovely. The first lock, Mayaca, had doors closed but there was no locking. We just motored right through. A couple of hours later, we hailed St. Lucie. After a wait for another boat to lock up, we were the 2nd lock down of the day. 14 feet, too, so a more substantial lock than the rest of Okeechobee. The lock master, happy to be back in business, was very friendly and recommended we go to Manatee Pocket.Which brought up an interesting point; getting through the lock was the goal. We really hadn't considered what to do after that.

Joining us throughout the day was The Lower Place. We chatted about anchorages and an upcoming blow from the south. All of use wanted to stay put for a couple of nights. They were going to check out Hoggs Cove while we investigated Manatee Pocket. Around that time another buddy, Apres Sail, saw us on Nebo and texted they, too, were headed for Manatee Pocket. Sounded like a plan.

But we got there first. And it was just packed! So many sailboats were stuffed in the 2 fairly small anchorages. We moved on and texted both boats not to bother.

We'd been told Peck Lake was a decent anchorage, and Apres Sail was passing by it. They checked it out and dropped the hock. We joined them about 30 minutes later.