LBK to Gulfport: Back on the water 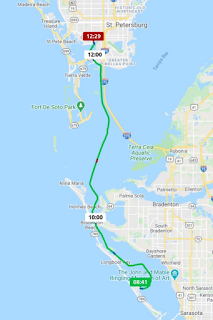 When we went to lunch yesterday we were staying in Longboat Key for another week. When we left lunch, we were headed out today.

Originally we planned on heading south (to the Keys) the first week of March. But we were plagued with a number of delays -- my small surgery (spoilers: I'm dandy) which required a week to wait for the stitches to come out, then the winds that came up again making travel a bit less fun, and Russ's 2nd Covid shot, which is coming next week. We'd planned on renting a car for that but looking ahead at the weather, we weren't sure we'd be someplace where he could rent a car to get back to LBK. So we were staying.

But we just hated, after over 3 months of being docked, to miss 3 good boating days. And we already cut our time short as to what we'd be able to do in the keys. So, we thought, what if we just started heading north?

We are crazy early, but that's okay. Given we have a condo in Nola, and still some work to do there, we thought we'd boat all the way to New Orleans. We don't want to head up the rivers until May anyway. So this gives us some time to get to NOLA and back.

We planned for "engines on" around 8 am, but we had a small setback. Our inverter wasn't running. It took Russ a half hour or so to realize it was in a charging-only mode. Once he flipped a switch (he loves when solutions are so simple), we headed out around 8:30.

It's Friday. As I mentioned, it looks like a great weekend. The boaters were already out in numbers. We had to deal with a few SeaRay/Prestige/go-fast boats who clearly believed that if they are on plane they make less wake than if they'd go slow. Which would be no issue if the channel were wide enough that we could pass with more than 10 feet between us. But the ICW in Florida is both skinny and narrow, and we were waked repeatedly.

We have stayed in this marina before so we knew where the fuel dock was. inQuest wasn't out but it had been since St. Augustine since we tanked up. The plan was to anchor out but we asked about staying for the night and, hey, they had a slip. From the fuel dock we'd have to do lots of tight moves to spin around to head toward the slip then spin again to back into it. So, to simplify things, I just backed the boat up the entire way.

Worked great. And that maneuver was a good introduction back into the techniques and subtleties of boating. All in all a good day one.