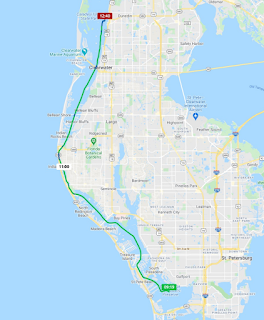 Last night some folks who winter in Gulfport told us about a great breakfast place, Stella's. Travel today would be short, so we decided to check it out before we got underway. It did not disappoint. We had a wonderful breakfast.

At 9 am we were underway, heading north, us and about a million other boaters. Lots of runabouts and rentals, all speeding and zipping, made for an interesting and busy ride. Being a bigger boat allows us to just get waked a bit, but these guys nearly swamped one another. Kinda fun to watch, actually. Russ commented that he owes the North Carolinians an apology.

By 1 pm we'd reached our destination which was an anchorage near Dunedin (pronounced duh-NEE-dn). It's right off the ICW, however, which meant a bumpy afternoon while we waited for the traffic to dwindle. We took a tender ride to the Bon Appetit, a restaurant near the town's docks. At first we couldn't get into the provided slips due to the quantity of dinghys already there. But the dog needed walked, so we snuck into a private slip where Lizzie and I disembarked. Russ picked us up and we checked out the docks again and, lo, someone was leaving.

The new Rigid Boat works exceptionally well. I felt much safer despite the bouncy seas. I think we'll get a bunch of use out of it.

Posted by Jax Robertson at 5:02 PM