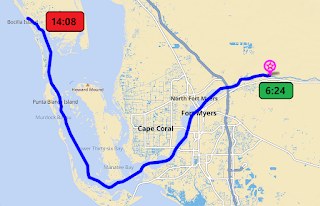 We spent 2 nights at the lock because of weather. After a good 4 day run from St. Augustine our luck ran out. And, given those long days we were happy to sit around and do nothing. The small park had an anchorage, which we felt more comfortable doing than hanging on the dolphins, unsure of how windy it would really be. We move early Thursday morning, dropped an anchor, then did nothing the rest of the day.

Today was still to be windy but much less than they'd predicted a couple of days ago. While Franklin was excellent protection we decided to go. We are running low on some critical supplies, due to an oversight in the stock room. Coffee. We're running out of coffee!

Within a couple of hours we were slowly moving through the ravaged city of Ft. Myers. It's been a little over a month since hurricane Ian but cleanup is going to take years; boats still on land, marinas closed, and blue tarped houses dot the shores. Just heartbreaking. 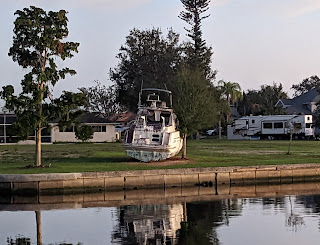 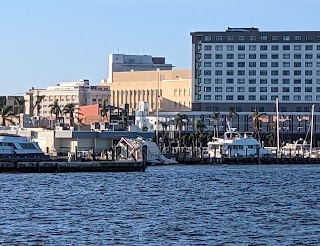 The east wind was on our stern all the way to the gulf. At that point you turn northward up the coast. We knew there'd be 1 body of water that could be choppy, Gasparilla Bay. As we neared it the water did get a little lumpy but the playful dolphins had us entertained.

That's when I noticed it first. The boat just -- for lack of a better word -- lulled. Humming along fine, then we slowed for a moment as the engine noise dies out, then back to humming. I ignored it the first time, thinking Russ did something at the helm (avoid a crab pot or whatever). Then it happened again. Then again. While watching the RPMs of the engines, the port side, set at 2300, would suddenly drop to 1600 or less, then start back up again.

Russ's first thought was clogged fuel filters. We turned off the port engine and ran on the starboard only while Russ inspected (yep, filthy!) then replaced the 2 fuel filters. At this point we were at the worst of the water, which wasn't terrible, but a little lumpy and made moreso by the lack of movement.

Once done we fired up the engine again and... it happened again. And again. And again. I shut it down and with only our starboard engine we looked for a nearby anchorage. I'm not the mechanic of the boat but I heard words muttered like "fuel solenoid" and "lose ground" so I'm hoping we'll have a fix.

Otherwise, our short day tomorrow to Longboat will be rather long. And rather slow.

But we will get to Longboat Key. We need coffee!!!

Posted by Jax Robertson at 3:59 PM