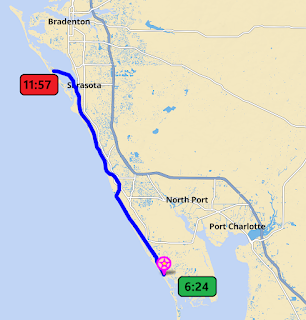 Russ determined the issue with the engine was electrical. He believed he isolated the problem and fixed it. As we normally do, we got an early start, hoping today would be short and without trouble.

It would also end this year's journey. Hard to fathom -- we went to Maine.

The anchor came up nice and clean and we started northward. Right off we met a couple of very energetic dolphins who leaped out of the water. I took it as a "welcome home" type of thing.

There are little towns on this section of ICW, which means lots of slow zones. We did see a manatee, which made slowing more amicable. Waking someone's home deck is one thing. Harming one of those lumbering and aloof creatures is another.
Early morning migration. Huge flock,
all traveling single file.
We got 2 hours into the voyage when the engines lulled again. Drat! Russ did have a theory. While underway he started playing with some electronics. Eventually, he could interrupt the engine on demand -- he isolated the problem. A loose wire, wouldn't you know. He fixed it with some electrical tape, and ordered a replacement part. Always something with boating.

After that we had no engine issues. As Red Green said, "If the women don't find you handsome, they should at least find you handy." Lucky for me Russ is both.

As we cruised both of us started coughing. Neither of us felt sick, but our throats burned, our eyes itched, and we could smell it. Red Tide. Some dead fish were scattered around. It had a physical affect on both of us.

We got in before noon and pumped out before docking inQuest in her slip for the season.

Another touring year behind us, and another ton of projects ahead of us. Such is boat life.

Posted by Jax Robertson at 6:29 PM