Getting closer to heading out

We hoped to start the get underway the first week of February. But it looks like the second week, now. Doctor and dental appointments have postponed things a bit. Meanwhile, the chore list is getting shorter. Russ has been working his backside off getting things done. So far it's all working, and much improved. Of course the real test will be when we get underway.

Winter finally set in. When we arrived in early November the weather had gotten colder. Then Mother Nature said, "Oh, never mind" and from mid-November to early January we had upper 70s and lower 80 temps. It's been the most moderate winter we've experienced in Florida so far. But things have finally changed. I've had "winter clothes" set out for months, and I'm just now using them. 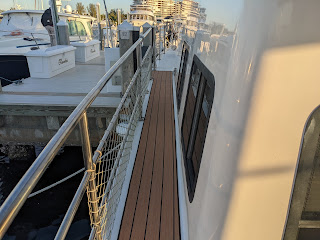