Frankly, I miss blogging. I take pictures of random things and, without a blog, have no one to share them with. So this is mostly pictures.

Besides, we have done a few projects, and have a few more planned. Documenting them will help me remember what I never want to do again.

Project Refrigerator: We had 2 boat-sized refrigerators. They needed constant attention since they would frost up in just weeks. Every now and again one would stop keeping temp. We assumed they were original to the boat and we wanted to replace them. Finding something similar took lots of googling and research, but we finally did.

Turns out one of the old fridges was original. The other was only a couple of years old. It, however, was the one that leaked most recently, making us make the change.

Project Refrigerator, part 2: About a year ago we bought an electric cooler for the sky lounge (which is the fancy name for the helm, upstairs). But it died. After talking to the manufacturer they told us to send it back.


From our boat we get some amazing sunrises. I call this series "Sunrise over Sarasota." 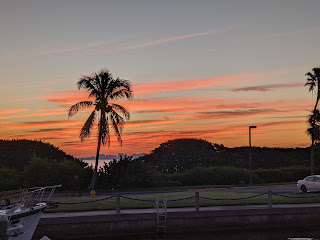 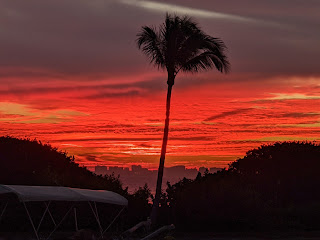 Project wash the carpets: We have a couple of large carpets inside the boat that, after a year of travel, rain, sand, dogs, and barefeet seriously needed to be washed. The pressure washer did an amazing job. 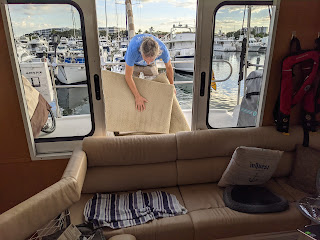 Project scooters: We owned a couple of vespas. They were perfect for getting around in New Orleans, but lousy for the island. We tried to sell them but no takers. We decided to donate them to charity instead.


Project Fitness: This last year wasn't great activity-wise for me. So my New Year's resolution is to get into shape. I blame the drugs I'm on for wiping out all my "joie de vivre" but that's just an explanation, not an excuse. I've already started with some daily walking.

Posted by Jax Robertson at 5:06 PM